How Can I Leverage My Military Experience in My Federal Resume?

The federal government loves military retirees!  Why?  Because they always get the job done, effectively and efficiently; they are strategic in their thinking; and they understand and respect authority. Couple these leadership skills with technical competencies, and now you’re cooking with fire!  Incorporate transferable skills from your military career to best market yourself on your Federal resume.  Transferable skills are the skills and abilities you have acquired during any activity in your life – your military career, jobs, classes, projects, volunteer work, parenting, hobbies, sports – virtually anything – that are applicable to what you want to do in your next job.  For example, the military has probably prepared you well to:

For more information on developing your federal job search strategy to attract the attention of the HR hiring team, visit us on the web at www.FederalJobResults.com.
Posted by Unknown at 12:02 PM No comments:

This weekend is a great time for football fans everywhere. Did you know that many U.S. Presidents were also college football stars?

Here is a candid compilation of football milestones achieved by U.S. Presidents, to include play-by-plays at Harvard and West Point - and which President called in a play to an NFL team from the Oval Office.

John F. Kennedy  - This iconic president played college football for none other than Harvard University. John may hold the political bragging rights, but his brothers - Robert and Edward - always took the prize on the field. While JFK did not progress past the Junior Varsity team due to illness and injury, his brothers were Harvard football lettermen. Despite his lackluster pigskin performance, John participated in intramural sports and touch football games whenever he could and later dedicated himself to physical fitness programs such as the Presidential Fitness award and inspiring Special Olympics.

"We do not want our children to become a generation of spectators. Rather we want each of them to be a participant in the vigorous life."
- President John F. Kennedy

Richard M. Nixon -  Richard Nixon used to wake up at 4am to stock his parent's produce stand before going to morning football practice at Whittier College in Whittier, California. Nixon was an excellent reserve tackle in college, but he is even more infamous for a little football faux pas called "The Nixon Play."  In 1971, Redskins coach - George Allen - received a phone call from then President Nixon on the eve of their playoff game against the San Francisco 49ers. Legend attests that Coach Allen gave his blessing to the president's proposition- a play that lost the Washington team greatly needed yardage and ultimately led to their demise in this pivotal playoff game. 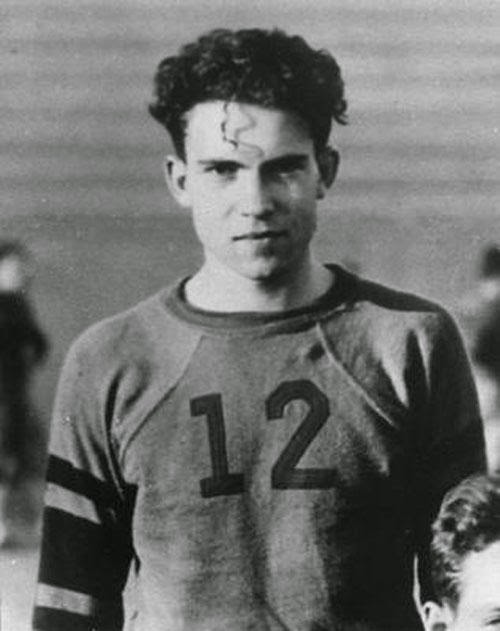 Gerald Ford - First off - how good looking was young Gerald Ford?  The only thing better than Ford's former hair performance was his pigskin prowess.  As an all-state champion at South High School in Grand Rapids, Michigan, young Gerald grew up to be an MVP for the University of Michigan.  His crowning moment included playing against the Chicago Bears on the 1935 collegiate all-star team. Ford turned down multiple pro football offers, to include a juicy offer from the Green Bay Packers. Ford made a very wise decision to take on a coaching position at Yale - to include an admission package to Yale Law School. 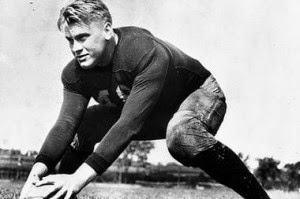 Ronald Reagan - This actor, activist, politician and president began his career in the spotlight as a lineman at Eureka College in Illinois.  Although his football career didn't go much further, he is most famous for portraying the football legend, George Gipp in the 1940 sporting drama "Knute Rockne." And yes - this starring role is the origin of Reagan's most famous nickname - "The Gipper." Reagan gained a lot of yardage from his football ties, to include coining a football friendly campaign slogan - "Just win one for the Gipper." 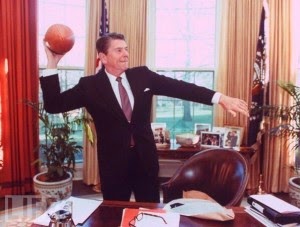 Dwight Eisenhower - Before tackling the Axis of Evil, Eisenhower's claim to fame was tackling the famous Jim Thorpe of the (then) Carlisle Indians. Our leader of the Allied Forces once said that "not making the baseball team at West Point was one of the greatest disappointments of my life, maybe my greatest."  Luckily for Dwight, this U.S. President ended up being a much better football player than baseball player (Sorry, Baseball!). Not only did the former General make the West Point football team, but he was a varsity starter as both a running back and linebacker.
Posted by Unknown at 6:33 AM No comments: